Even with hindsight the global impact of World War II is sometimes hard to comprehend.  It was a conflict that reached the furthest and most remote parts of the world and its effects over seventy years later are still with us.

As late as 1943 the outcome was still in the balance and the last two years of the war would see Nazi Germany and Imperial Japan exact a terrible toll in lives and wealth before the Allies triumphed.

By 1945 sixty million people, 2.5 per cent of the world's population, had been killed.

The  war was punctuated by battles and campaigns – some lasting just a day and others dragging on for months  that defined the character and later history of the conflict. 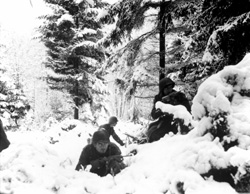 was Operation “Watch on the Rhine” and in the beginning it enjoyed remarkable success against the US forces opposite them.  Part of the reason for this surprise was the high level of communications security  and that the Germans were attacking from their homeland and consequently there were no friendly resistance groups to pass intelligence to the Allies.

Some 1,000 tanks and assault guns and 250,000 troops hit six raw or exhausted US Divisions.   At one stage 9,000 American troops surrendered – the second greatest mass surrender by US forces in history.  But elsewhere they hung and and  fought back, notably at the town of Bastogne that was cut off and surrounded but the men of the 101st Airborne Division held out.

By the new year as the weather improved the battle had swung against the Germans and the US forces lost 19,000 killed and 47,000 wounded and the British 10,000 casualties, the Germans lost tanks, aircraft and about 100,000 casualties. 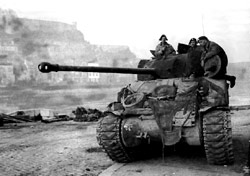 France
Dieppe: August 19, 1942
Operation Jubilee the “Reconnaissance in Force”  the amphibious attack on the northern French sea port of Dieppe by the 2nd Canadian Division supported by Commandos remains one of the most controversial 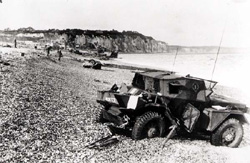 The brutal reality was that in nine hours nearly 1,000 Canadians died on the beaches and  2,000 were taken prisoner while only 600 wounded and a few unhurt men returned.  Almost nothing of military value was achieved. For Canada the losses were as great as anything suffered in World War I. 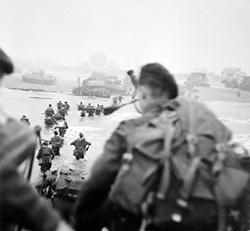 Normandy 1944
D-Day, June 6, 1944 – Operation Overlord -  is a date that resonates down to us through the years.  The invasion of North West Europe by British, Canadian and American forces was the long awaited “Second Front” and for some British soldiers it was payback for the defeat in 1940 and evacuation at Dunkirk.

The fleet assembled for Operation Overlord was formidable including 1213 warships, 4126 landing ships and craft of various types, 736 ancillary vessels and 864 merchant ships.   The US VII (7th) and V (5th) Corps landed on beaches code named Utah and Omaha while the British I and XXX (30th) Corps landed on Gold, Juno and Sword beaches.
Even before the the landing craft hit the beaches the US 82nd and 101st Airborne Divisions had  parachuted into France close to Utah and the British 6th Airborne Division had landed to the east of Sword Beach.  The landing and fighting through the Atlantic Wall defences on the coast came at a high price by the end of the day 2,500 men had been killed and 8,500 wounded and the Allied air forces had lost 127 aircraft.

However between 06.30 and 23.59 hours on D-Day 57,000 US and 75,000 British and Canadian troops and their equipment had been landed and the beachheads were being linked up as a continuous front.   By the end of  two The British Prime Minister Winston Churchill described Fascist Italy as the “soft underbelly” of Nazi occupied Europe.  In 1943 he was convinced that Allied landings would topple the Italian Fascist leader Benito Mussolini and allow the Allies to drive into Austria and southern Germany.  While Mussolini was overthrown and Italy 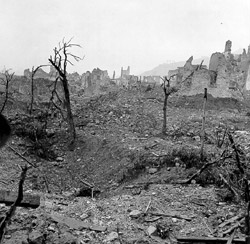 joined the Allies, the mountains and rivers of the Italian peninsula were a major obstacle and tough, well directed German troops under Field Marshal Albert Kesselring proved to be formidable opponents.

The rescue of Mussolini from his Italian captors by Otto Skorzeny from the mountain prison at Gran Sasso is a classic coup de main operation. The campaign would produce the grim epic of Monte Cassino and the amphibious operations at Salerno and Anzio that could have ended in disaster.  German staff officers hoped that they could replicate the near victory at Anzio when the Allies landed in Northwest Europe on D-Day. What is remarkable about the campaign is the diverse national make up of the Allied 5th and 8th Armies.  In the British 8th Army there were men and women from throughout the Commonwealth and also Polish troops while the US 5th included men from Brazil as well as Hawaiian Japanese. 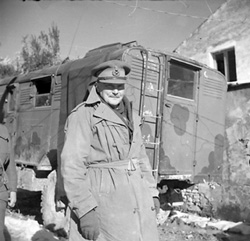 The feature could not be by-passed but blocked the southern approaches to Rome and any further progress northwards by the Allies.  It would take four assaults by American, British, New Zealand, French, Indian, Canadian and Polish forces before finally the tough fighters of the German 1st Parachute Division were forced out of the mountain stronghold.

Allied casualties in the four battle amounted to about 21,000 including 4,100 killed and in post war years the Polish cemetery at Monte Cassino would become a place of pilgrimage for Poles displaced from their homeland by the Communists.