Meet our Advisory Board

Welcome to the Advisory Board page of Spirit of Remembrance.

As Chairman I would like to introduce you to the Board and explain the reasons why we are here.

Each member has been carefully appointed and brings a wealth of knowledge and experience in areas related to the service community and their families or the hospitality and tourism industry. Our purpose is to promote the understanding of war amongst the population at large and perpetuate acts of Remembrance.

As part of the Spirit of Remembrance team we share a passion to ensure all avenues are explored to enable veterans, family members and others interested in conflicts worldwide to remember those who fought to enable us to be free men and women.  In addition, for them to visit locations where they served and sadly where family or comrades fell.  We will seek out grants and other avenues of support to facilitate their travel through Spirit of Remembrance either individually or with a group.

Together we will identify opportunities to visit new locations, previously ignored, to monitor the quality and service of Spirit of Remembrance and to generally be a “sounding board” on proposed activities. Perhaps most importantly, to provide a voice for existing service personnel regarding what they feel is important for Spirit of Remembrance to provide to enhance their standing with the public.

In addition to Ros and Robert, we will be joined by a service man or woman with recent operational experience, a senior retired military officer, an executive from a major service charity and a travel executive with extensive worldwide travel knowledge and experience.

We would be pleased to respond to your questions or suggestions, simply complete our Contact form.  Alternatively, you can send us personal emails by becoming a member of Spirit of Remembrance then just send us a message from your personal page.

Chairman of the Advisory Board 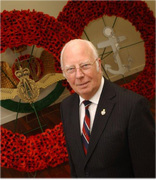 Peter retired as National Chairman of The Royal British Legion in 2010 and is now a Trustee of Haig Homes and also represents the veterans from St Kitts and Nevis in the UK for The Royal Commonwealth Ex- Services League. He was awarded his CBE for voluntary service to Ex-service Men and Women.

Peter served in the RAF in the fifties in early warning radar and joined the BBC on demob, serving for 27 years before retiring early as Head of Engineering Transmission. He travelled worldwide, having responsibility for Health and Safety, Site Acquisition, Administration, Finance, Shipping and Procurement. His last task in 1989 was to relocate the Transmission Directorate to Warwick, prior to its sale to Crown Castle as part of the BBC privatisation. On leaving the BBC he became Business Development Director for Aerial Sites, a provider of facilities for TV, Radio, Emergency Services and Mobile Radio users. After 13 years he retired after negotiating its sale to Spectrasite Transco, a USA/UK consortium.

During the last ten years Peter has extensive experience leading Pilgrimages worldwide with relatives of those who rest in Commonwealth War Cemeteries.

Peter is married to Una, a Hospice Sister, who also has 20 years’ service as a Major in Field Hospitals where she was awarded the TD. Una has accompanied Peter on Pilgrimages, providing medical cover and, when needed, comfort and support to the families of the fallen.

Member of the Advisory Board

Ros Campbell was Secretary of the War Widows Association before being elected Chairman. The War Widows Association is a practical and active organization whose aim is to improve the conditions for those who suffered bereavement as a result of World War II and all conflicts since then including Iraq and Afghanistan.  The WWA also represents those who have suffered the loss of their partner in peacetime, when the death was attributable to their service life. This includes campaigning over pensions and benefits, and providing information and advice to members. They have over 4,000 members. To learn more about this very special association click here

Ros is very active ensuring that War Widows continue to be recognised and receive proper support to ensure they are not in need. She attends the dedication of the names of those who have fallen in the previous year at the Armed Forces Memorial at the Arboretum. She is a very busy lady who is looking forward to advising Spirit of Remembrance, to ensure the needs of War Widows are properly considered.

Member of the Advisory Board

Robert Fraser Newell, CVO 2011 (LVO 2000) has recently retired as Director-General of the Royal Over-Seas League in 2011. He has an impressive and varied background having been educated at University College School then going on to take hotel management positions in London and Iran. He was Director of  Administration  Kenya Utalii College, Nairobi, 1974-1979 and then went on to become the General Manager Royal Over-Seas League 1979-1991.

He brings a wealth of experience which will be of great value to Spirit of Remembrance.  His work for the Chain of Hope charity since 2000 adds a deep understanding to our focus.  He married Shahnaz Bakhtiar and is the proud father of 2 daughters.

Member of the Advisory Board (Youth Advisor)

George Edward Taylor is our youth advisor.  In 2012 he became the youngest person ever to be recruited by a charity.  As Area Officer for Kent County in England for the Victoria Cross Trust, George is responsible for inspecting the graves of the 29 Victoria Cross holders across the Kent County, taking photographs and writing reports for the trust regarding their condition.

George started fundraising for The Royal British Legion at the age of 8 when he saw a story on television about a war veteran who had to sell his medals to pay his heating bills. He is still extremely active fundraising though various charity activities.

To learn more about George and the wonderful work he does please click on the following links: