NEW! Check out our picture library from the WW1 Wellington Quarry Tunnels: Arras 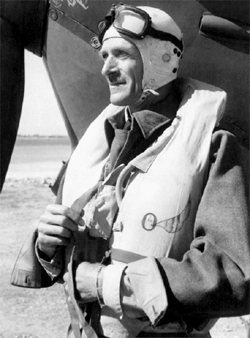 For a tiny nation New Zealand has always punched above its weight in both World Wars and in conflicts since 1945.  Britain owes a special debt of gratitude to New Zealand not only for the courage and sacrifice of young men and women who in the words of the memorial at Ypres where the memorial at s-Graventafel to the New Zealand Division records that they came 'From the Uttermost Ends of the Earth' but for also for critical leadership in the Battle of Britain.

The inspired leadership of the Royal Air Force's 11 Group by the New Zealander Air Vice Marshall Keith Park earned him the nickname from his adversaries “The Defender of London”.  One of the top Allied fighter aces of the war Johnnie Johnson, echoing Churchill's words about Admiral Lord Jellicoe in World War I,  said of Park “He was the only man who could have lost the war in a day or even an afternoon”.

Park's command of 11 Group RAF was instrumental in winning the Battle of Britain. After the war Lord Tedder, Chief of the Royal Air Force said of Park "If any one man won the Battle of Britain, he did. I do not believe it is realised how much that one man, with his leadership, his calm judgement and his skill, did to save, not only this country, but the world."

Park was a modest man and so too was Captain Charles Upham one of only three men to win a bar to the Victoria Cross.  Asked about his exploits in Crete and North Africa in World War II that earned him these decorations the New Zealand soldier would say "The military honours bestowed on me are the property of the men of my unit."

The total number of New Zealand troops and nurses to serve overseas in World War I was 100,444, from a population of just over a million. Forty-two percent of men of military age served in the New Zealand Expeditionary Force (NZEF). 16,697 New Zealanders were killed and 41,317 were wounded during the war - a 58 percent casualty rate.