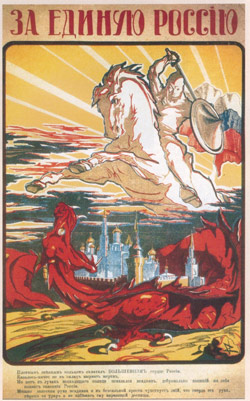 The hope felt by many who had lost husbands and brothers that the First World War would be the war to end all wars was and sadly still is only an unfulfilled dream.  In Russia the Bolshevik revolution against the autocratic Tsar Nicholas led to a civil war that lasted three grim years and would produce a diaspora for the surviving Russian nobility and their followers.  It was the same Communist ideology that would be one of the drivers in the Spanish civil war that exploded 15 years later. It was a terribly brutal war the effects of which would linger on long after World War II was over and the rest of Europe was beginning to re-build and re-construct.

The Russian Civil War 1918-1921
The war between the Red (Bolshevik/Communist) Russian forces and the White Russians was like all civil wars characterised by brutality, terrorism, assassination and political intrigue.  White forces managed to seize most of Siberia and in August 1918 British, French, Japanese and American troops landed at Vladivostok on the Pacific Ocean's  Sea of Japan and British and Americans at Archangel on the White Sea this intervention was intended to support the White forces.  After the Siberian city of Omsk that was the White HQ fell to the Reds in November 1919 the foreign powers withdrew.  The Reds under the Communist military affairs commissar Leon Trotsky slowly crushed White resistance.  The British expeditionary force included a number of officers who had fought on the Western Front and would later hold senior positions in the Army in World  War II.

Choose your guide: Will Fowler 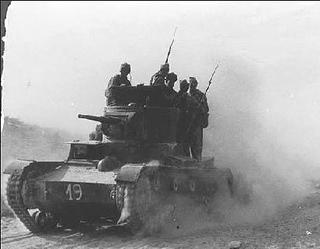 The Spanish Civil War that ripped the peninsula of Spain apart between 1936 and 1939 has been described as the rehearsal for World War II.   It was the war that would see the dive bomber and tank used together in the lethal combination that would become to be known as Blitzkrieg in the first four years of World War II.  The ability to lift troops by air would see the Nationalist forces under General Francisco Franco rapidly reinforced as German aircraft flown by German crews moved troops from Spanish Morocco to the mainland.
While in some ways a “modern” war, the Spanish Civil War also looks back to the world of Medieval warfare with the three year siege of Madrid. The Spanish Civil war would see the clash of the two great totalitarian movements of the 20th Century – German and Italian Fascism and Soviet Communism – in Spain Fascism would triumph – five years later in World war II the Soviet Union there would exact a brutal pay back

Choose your guide: Will Fowler