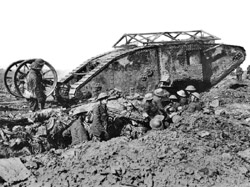 To those who lived through it it was The Great War or The War to end all Wars.

The civilian and military death toll in this war reached a staggering 15 million with 20 million wounded.  In 1914 the technology, weapons and tactics were those of an earlier century, by 1918 the combatants were employing chemical weapons, armoured vehicles and aircraft in close support on the battlefield.

In 1914 many of the warring nations had entered the conflict with kings and emperors as national leaders by 1918 the crowned heads were gone and new nations and republics had been born out of the carnage.  In Russia the Bolsheviks were morphing into the Soviet Union a power that would dominate world politics for much of the 20th Century.

What was it like before war broke out?  Click here to see rare 1914 footage on an innocent age 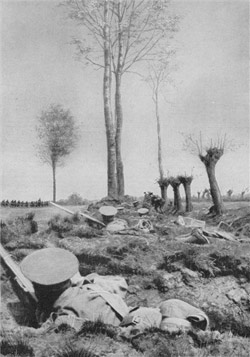 The defence of the Belgian mining town of Mons in 23-24 August 1914 has an important and traditional place in British military history.  It was among the slag heaps and along 1 miles of the Mons-Condé Canal that the men of the 2nd Corps of the British Expeditionary Force (BEF) covered the 21 bridges across the canal.  It was said that the accurate marksmanship and speed with which British soldiers operated their bolt action SMLE rifles convinced the Germans that they had come under fire from machine guns.

On Sunday 23 August the first Victoria Crosses of World War I were won by a Captain and a Private of the Royal Fusiliers manning a machine gun on the canal.  Under pressure from German field artillery the British were finally forced out of their positions and withdrew two to three miles to the south.  They had suffered about 1,600 casualties inflicted about 3,000 on the Germans and bought valuable time for the Allies in the Battle of the Frontiers. 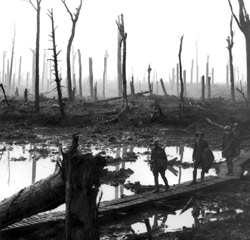 around the ancient Flemish town, which was part of what was known as the Western Front.  Ypres would be fought over in three separate battles that ranged form mobile infantry actions in 1914 through to the first use of chemical weapons in 1915 to the grim blood bath of 1917 when British and Canadian and Australian soldiers fought and died to keep pressure off the demoralised French.

The German use of chlorine gas against French and Canadian troops could have produced a breakthrough – however they were unsure of how effective it would be and did not follow up fast.  The first Territorial Army Victoria Cross was won by Lt Geoffrey Wooley in a grim night of April 20-21, 1915 on Hill 60 a battered and blasted feature  to the south east of the city. 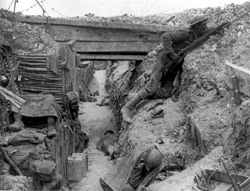 The fighting for the Somme has been characterised as a futile and bloody campaign.  The losses on this sector of the Western Front were truly grim as the cemeteries that dot the chalk hillsides  testify.  On July 1, the first day of the attack the British had suffered 57,450 casualties of whom 20,000 were dead and very little ground had been gained. By the end of the fighting in the cold and wet of November the British had lost 420,000, the French 195,000 and gained 125 square miles while the Germans had suffered 650,000 casualties. However the sacrifice of the  Somme had bought time for the weakened and demoralised French to recover, but more importantly by their own admission it had broken the German Army.

In 1918 the Germans launched the Kaiserschlacht the Emperor battle on the Somme – it threw the Allies back, but for the gain of 40 miles the Germans had lost 150,000 killed and wounded and now the United States was in the war.  Seven months later the war was over and Germany was defeated.

Battle of the Somme (Real footage)
Suggested tour itinerary: Specially designed for you - let us know where you would like to visit
Tours which visit this area:  Western Front  OR Personal Somme tour
Interested in a tour? Click here 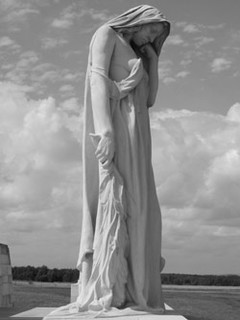 The capture of the key feature of Vimy Ridge on the Western Front on Easter Monday 1917 by four divisions of the Canadian Corps under Lt General Sir  Julian Byng is an example of how lessons learned, reconnaissance, good planning and well trained and led troops could achieve remarkable results.

Vimy Ridge had withstood repeated attacks over three years and over 130,000 French soldiers had died in these attacks.  Now preparations included miles of tunnels to protect troops, a well planned artillery fire plan and rehearsals and detailed briefings.  Using the innovative tactics of fire and manoeuvre the Canadians Leap frogged through German positions reached the summit and saw “the green fields beyond”.

They had suffered 10,600 casualties of whom 3,000 were dead, but the Germans had lost 20,000 and the ridge.  It is said that Canadians left their homeland as “young Colonials” to fight in World War I, but after Vimy they returned home as Canadians. 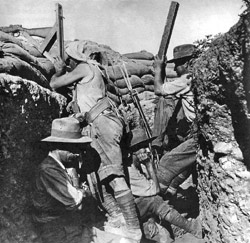 time when three nations came of age.   Soldiers from Australia and New Zealand grouped in a Corps that would become famous as ANZAC fought alongside English. Welsh, Scottish, Irish, India and French troops.
Their opponents the Turks fought courageously and by the close of the ill fated campaign the Allies had lost 252,000 casualties from a force of 500,000 who had landed.  Turkish losses have never been accurately calculated but estimates are that of 251,000 casualties 66,000 were killed.  The most notable battles were those of Lone Pine in which the ANZACs attacked on August 6 and Sari Bair on August 8-9 actions that Major General Fuller called “a battle of valour run waste”
Out of this carnage Australia and New Zealand emerged as distinct and independent nations and modern Turkey was born.  Gallipoli was the brain child of Winston Churchill and is a campaign that still fascinates historians since it was shaped by chance and fate.
Gallipoli tour itinerary
Tribute film to the Australians at Gallipoli (rare footage)
Original footage from Gallipoli   ANZAC film of Gallipoli
List of Gallipoli related pages