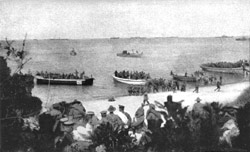 The Mediterranean has been a battleground for millennia – its islands and seas have been fought over by pirates,battle fleets and the armies of many nations.

Gibraltar captured from Spain in the War of the Spanish Succession in 1704 would be a vital naval base and “cork” blocking the straits that lead from the Atlantic to the inland sea.  To the east the heavily bombed island of Malta would earn the unique distinction of being an island awarded the George Cross for it courage in the Second World War.  Not far from Malta the Italian island of Sicily would be invaded by Allied forces in Operation Husky on the night of July 9-10, 1943.  This amphibious operation was on a huge scale and invaluable lessons would be learned from it that would be applied in D-Day a year later.

In 1941 the Greek Island of Crete held by British, Commonwealth and Greek forces was the grave of the elite German airborne arm.  The casualties suffered by the Germans troops – 4041 dead and missing meant that Hitler decreed that airborne forces were never to be used again in a mass attack.  They were however used two years later in the Italian Aegean islands of Kos and Leros where a mixed force of British and Italian troops were overwhelmed by a sea and air attack in September 1943.  It was the last German victory of  the Second World War and would see nearly 10,000 British soldiers taken prisoner.