Sausage Dogs Persecuted - the Fall of Dachshund during WW1

I subscribe to Picturing the Great WarThe First World War Blog from Mary Evans Pic... . The Mary Evans collection is simply amazing, I strongly recommend you take a look.

This story came in this morning and I wanted to share.  I know that everything German was taken off the shop shelves and the anti German sentiment meant significant changes including to birth of the House of Windsor, but as a dog lover I had never considered dogs would be caught up.

To see all the images please visit their blog. We’ve visited messenger dogs on the front lines, and met charity dogs doing their bit to raise funds, but now this blog takes a look at the dachshund, and the prejudice this German breed encountered during World War One. As a dog lover, Mary Evans herself amassed an enormous and varied collection of canine-related material in her lifetime, giving rise to this unusual pictorial perspective on how dachshunds were portrayed, and occasional persecuted, in the Great War.

As late as April 1914, The Illustrated London News ran a rosy feature as part of their on-going series “The Women’s Cult of the Dog”, No. X111 of which reported on The Dachshund. The page featured photographs by the eminent dog photographer, Thomas Fall (whose collection is now represented exclusively by Mary Evans), with text that praised the breed as being “loved as a merry, amusing, quaint, clever little companion, affectionate and faithful”, though also acknowledged it to be “wilful”. The article called for a greater appreciation of the sporting potential of the breed, which was originally bred to work below ground, hunting badger and fox. 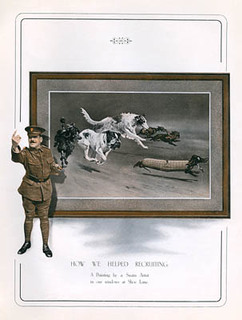 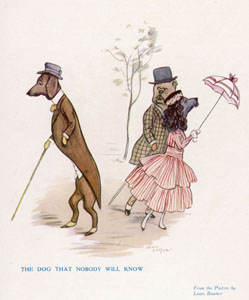 Though often employed in humorous illustrations, the Teutonic associations of the dachshund resulted in a decline in its popularity as a breed, as patriotic dog lovers of the allied nations choose to express their allegiance through their choice of pet. 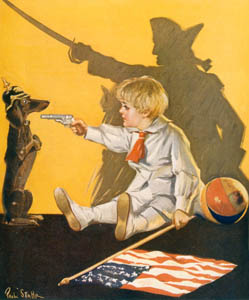 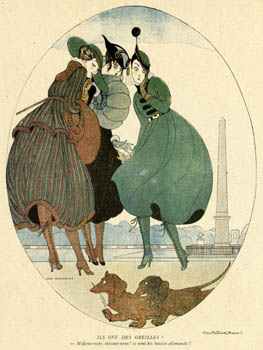 Echoing the anti-German sentiments expressed through the use of dachshunds in political cartoons, advertisements and postcards, it was reported that some dachshunds on the home front were actually the victims of violence themselves. Author Graham Greene was a schoolboy in Berkhamsted in Hertfordshire at the outbreak of World War One, and recorded much later in his autobiography,(‘A Sort of Life’, published in 1971), the anti-German hysteria experienced in his home town, during which a dachshund was reputedly stoned in the high street. Though reports of this kind have been repeated, and have somewhat entered into World War One folklore, actual documented cases of dachshund-stoning in Britain seem to be rare.

Attempts were made to rebrand the breed, with the American Kennel Club officially renaming it the ‘badger dog’(a literal translation from the German), with others giving it the moniker ‘liberty pup’. German shepherd dogs received a similar treatment, and are still known today by some as ‘Alsatians’, a label given in an attempt to emphasise the French origins of the breed from Alsace, rather than Germany.

Adding to dachshund's wartime woes, the Kaiser’s love of dachshunds was well documented, reinforcing for some their negative Germanic associations.    Two particularly bad-tempered dachshunds belonging to the Kaiser, named Wadl and Hexl, almost caused an international incident, when they set upon the heir-presumptive Archduke Franz Ferdinand's priceless golden pheasant on a semi-official visit to his country seat, château Konopiště. Though this was no doubt a distressing episode (not least for the pheasant), the Archduke would soon have bigger problems to face than the Kaiser’s belligerent dachshunds.

Even in exile at Huis Doorn in the Netherlands after World War One, the Kaiser was accompanied by his faithful dachshunds, five of which were buried in the surrounding parklands. One German postcard in the archive depicts a pensive Kaiser in exile, with an equally pensive-looking dachshund seated next to him on a bench.  Though the Kaiser’s reign was truly over, that of the dachshund was not: despite its continued Germanic associations, this much-loved breed endured another world war with Germany, and remains a very popular pet to this day.