Every year there are moving commemoration services in both Zeebrugge and Dover to commemorate those lost in raids on Zeebrugge and Oostende harbours in April and May of 1918.

Many brave men lost their lives in these attacks, which were of limited success, and eight Victoria crosses were awarded as a result of the raids.

On the night of 22nd April 1918, the Royal Navy's Dover Patrol launched a daring raid on the German fortifications at the harbour of Zeebrugge. The German U-boats were stationed at the fortified base at Bruges, which had easy access, via an eight mile canal to Zeebrugge, and from there to the Channel. Zeebrugge, was, at the time, the largest man-made harbour in the world, stretching one and a half miles out into the North Sea. The submarines lurked in the Channel and North Atlantic, and, by 1917 allied ships were being sunk at the rate of four hundred a month. The British Government realised that the U-boats had to be stopped at all costs; the submarine menace had to be brought under control.

At first, a huge barrage of nets, with minefields on either side, was strung across the Channel suspended from fishing boats and buoys. The Royal Navy was sure that this would deter the submarines but they were wrong. Intelligence revealed that the Germans were still passing through the Straits of Dover, escaping detection by sending their submarines on the surface at night, passing over the top of the barrage and the minefields.

Hence the need for daring action and a plan, code named “Operation ZO” (Zeebrugge/ Oostende), was hatched. The plan was to block the Bruges canal by filling three old coal-burning cruisers - Thetis, Intrepid and Iphigenia - with concrete, sailing them across the Channel with a minimum crew and then to scuttle them in the entrance to the canal.

An armada of vessels sailed on 22nd April 1918, bound for Belgium. HMS Vindictive, an Arrogant-class cruiser, was accompanied by two submarines, two Mersey ferries, and a flotilla of other craft. The Mersey ferries, the Iris and the Daffodil, were ideal landing craft, having been commandeered for their low draught and double hulls which made them difficult to sink. A force comprising 82 officers, 1,000 men, and 700 marines, all volunteers, took part in the raid.

The plan was to scuttle the three old cruisers in the harbour and to block the Port of Bruges-Zeebrugge, but all did not go as planned. Winds changed and the smoke-screen, designed to cover the initial diversionary attack, failed. As a result, the German gun positions on the mile-long Zeebrugge mole, the fortified promontory at the harbour entrance, were not destroyed and continued to inflict torrential close-range fire. Prevailing currents prevented HMS Vindictive abutting the breakwater to discharge troops, so the Daffodil nudged her in, but was severely damaged and the landing parties suffered very heavy casualties. However, they did manage to distract the Germans at a crucial moment, and two of the three blockships were able to reach their target. They were sunk in the entrance to the inner harbour, but did not fully block it. The Germans were able to dredge a new channel around the blockships, and the port was very quickly back in use. The human cost was horrendous: in an hour, 214 men were killed and 383 wounded.

Some weeks later, on 10th May, HMS Vindictive was in the firing line again in a raid on Oostende. Already badly damaged from Zeebrugge, she came under heavy fire. She ran aground at the channel entrance, and was sunk in place, blocking one third of the channel, but, once again, the mission failed to prevent German submarines from using the harbour. 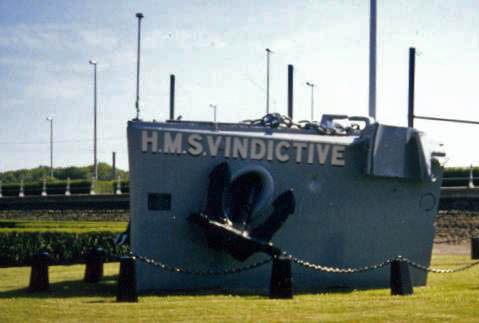 The bows of HMS Vindictive are still visible in Ostend, a memorial to a very gallant action. One of our guides, a former naval officer, is an expert on the subject. If there is sufficient interest we can organsie a tour to cover Zeebrugge and Ostend.