WW1 Rouen and its base hospitals The ancient French city of Rouen on the Seine has played a significant role in the two World Wars. In 1940 its capture gave the invading German forces a bridgehead across the Seine and consequently areas near the river were bombed and shelled.  In the spring of 1944 Allied aircraft completed the destruction that eventually left 45% of the city in ruins.

In the First World War the city was safely behind the lines and became a major logistics centre with numerous base hospitals. Commonwealth camps and hospitals were stationed on the southern outskirts of Rouen. A base supply depot and the 3rd Echelon of General Headquarters were also established in the city.

Almost all of the hospitals at Rouen remained there for the duration of the war.
On the champ de courses on the outskirts of Rouen, the British established
Nos.5, 6, 9, 10, and 12 General Hospitals
Nos.1, 3, 8, 11, and 12 Stationary Hospitals No.12 Stat. only worked for a short time there, and then remained, parked, until it moved prior to the Somme in 1916.The Convalescent Depot

No.8 General Hospital was to the south of the town, and was, for most of the war, the largest of the Rouen hospitals, but its isolated position away from all other units caused some unrest among the nursing staff, who often felt rather cut off.  No.2 British Red Cross Hospital was more central to the town.  Two other hospitals were operated within the racetrack. One was a British hospital for wounded PoWs and British prisoners who had self-inflicted wounds and the third was a British colonial hospital.No. 1 Australian General Hospital at also at Rouen

There are two Commonwealth War Grave Cemeteries on the outskirts where burials from the hospitals took place.St. Sever Cemetery, 3081 burials and St. Sever Cemetery Extension, 8656 burials.  There are two other CWGC plots in Bois-Guillaume cemetery in the North of the city on the road to Neufchatel with about 300 burials in each.

Not all the men in the hospitals were battle casualties – sexually transmitted diseases took a toll of soldiers in France and a "Client for Rouen" was Army slang for a 'venereal' case.  In fact a brothel had been established in Rouen and was visited by 171,000 men in its first year, with just 243 infection cases, but public opinion in the UK forced its closure

We recommend that you visit the Great War Forum which has interesting comments about hospitals in Rouen.  Click here 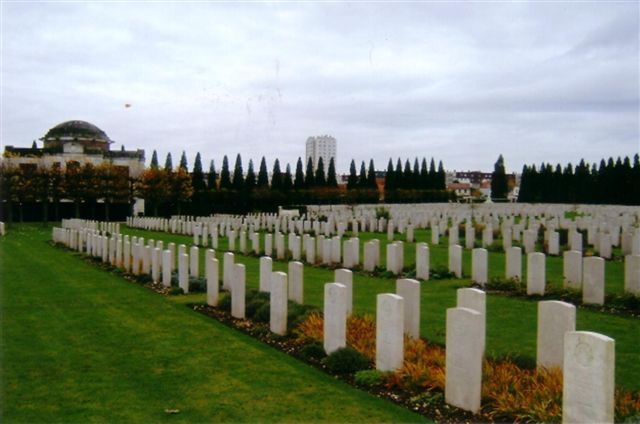