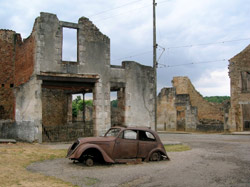 Poetry, painting and photography – modern and ancient artistic skills gave soldiers an escape from the boredom that is a characteristic of war.  Spirit of Remembrance tours take travellers to the theatres of war and battlefields that shaped this creative work.  Perhaps the most powerful is the remains of the concrete bunkers that made up the dressing station at Essex Farm north of Ypres.  It was here that the Canadian doctor John McCrae wrote the poem “In Flanders Fields”.

In the UK themed tours can take a traveller from the hill forts and castles that shaped the ancient history of the island to the Battle of Britain airfields and related museums.  Regimental and corps museums give an insight into the origins and history of some of our finest regiments and the men whose gallantry stands as an example of the finest qualities of human courage.

Themed tours can follow the route taken by escaping Allied prisoners of war as they made their hazardous journey across Occupied Europe to neutral Switzerland and Spain.  As with all Spirit of Remembrance tours there is scope for the traveller to set his or her agenda and a tour to be built around this - 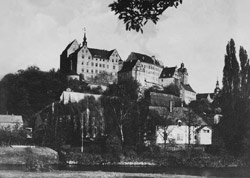 Flanders where the artist drew his inspiration – the scope for these tours is almost unlimited.

There is a large range of themed tours on offer, some of which are listed below.  Please read on to learn about Animals in War; Escapees, Resistance & SOE; CWGC Gardens of Remembrance; Legends & Traditions; Poets; Women in War.

Our guides are very knowledgeable about a wide range of topics so please Contact us with your ideas.

Detailed pages on the following themes: 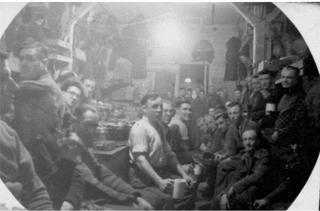 To serve your country is an undoubted privilege. To continue to serve while in the hands of the enemy as a Prisoner of War is a particular type of honour. There is an honour in maintaining your understanding of what it is to serve while not being in a position to be seen to serve, except by those around you who are in the same situation as you.
The experience of the Prisoner at War has been characterised in films and television such as Bridge on the River Kwai, The Colditz Story, and Stalag 17. It has been caricatured in Hogan’s Heroes. It has become an icon seen almost every year on British television in the film The Great Escape. But only those who lived through time in a POW camp will truly know what it meant. They lived a range of emotions from fear, exhilaration to boredom. Whether in the day to day drudgery of passing 24 hours, or suffering the brutality of camps in the Far East, trying to survive the disasters of the marches across Europe from camp to camp as 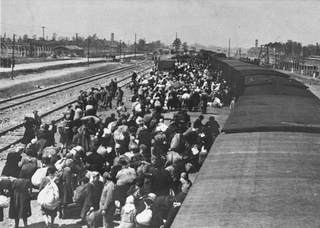 Germany lost the war, this was a life that we can only hope to imagine. However, the opportunity to visit camps, in Europe or the Far East, gives us a chance to begin to develop an awareness of that life in the camp system. For us, a chance to learn, for some the ability to return, maybe to honour those who did not come home? For a few, the opportunity to go back to a camp in which they were interred for many years is a once in a lifetime experience.
At Spirit of Remembrance, we work with organisations that support remembrance of the camps, and utilising grants available from government and the Lottery, to provide tours for men to return, for families to accompany and for others to visit.
Two examples of how we help people to visit the camps are below. Even today Military Working Dogs are locating Improvised Explosive Devices and hidden weapons in Afghanistan and so saving lives not only of soldiers but also the civilian population.

However animals have been involved in war from the earliest times for transport and load carrying and also in combat.

The big English Mastiff would go into battle and defend its master if he was wounded and immobilised.  The spirit of the cavalry lives is in London with the breast-plated Household Cavalry while the horses of the King's Troop Royal Horse Artillery tow the 13 Pounder Field Guns and limbers used to fire state and Royal Salutes.

Animals have a place as regimental mascots and on ceremonial occasions have been known to give their handlers quite a handful when they decide to take a more independent course of action.  In the recent past mules carried loads in remote mountainous areas, dogs were used to locate wounded soldiers and homing pigeons carried vital messages.

In 2004 HRH The Princess Royal opened the powerful and poignant Animals in War Memorial at Brook Gate,

Park Lane with its bronze figures of mules carrying a mountain gun and a dog and a horse. 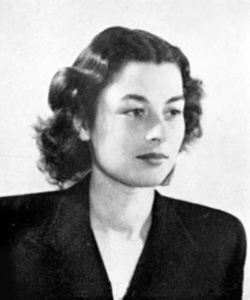 The Special Operations Executive or simply SOE was an armed British subversive organisation that came into being in July 1940 and having served its subtle but often violent purpose was disbanded in January 1946.  Its function was in the words of the wartime Prime Minister Winston Churchill was “to set Europe ablaze” and to achieve this young men and women were parachuted or landed by light aircraft in Nazi occupied Europe.
Among their functions was the gathering of intelligence and the organising and training of resistance groups in Europe.

To the Germans SOE agents were  acting beyond the rules of war and therefore not protected by the Geneva Convention – in fact all SOE agents were commissioned officers in branches of the Army.  If captured an SOE agent faced  a brutal interrogation, torture, execution or transport to a concentration camp.    The SOE was a substantial organisation of about 13,000 men and women and was answerable not to the War Department but to the Minister of Economic Warfare.

In some theatres SOE agents worked closely with the SAS – the former identifying target and gathering intelligence while the latter provided the muscle and fire power for direct action. 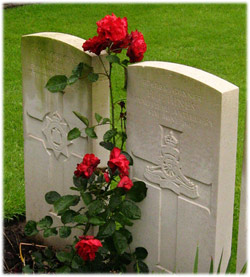 The philosophy that shaped the planting and design of Commonwealth War Graves Cemeteries was to give them the feel of a country garden.  The knowledge and advice of the garden designer Gertrude Jekyll and the head of the Assistant Director of the Royal Botanical Gardens Kew contributed to the plant choice and layout.
In many cemeteries floribunda roses or herbaceous perennials were planted at the end of the rows of graves and plants were selected for the narrow beds in front of the graves that would not grow vigorously and obscure the wording on the headstone.
Lawns were planted between the lines of headstones and pergolas with climbing plants like wisteria helped to give the cemeteries a sense of tranquillity.  Hauntingly one cemetery on the Somme is planted with Day Lilies – flowers that bloom for only 24 hours while another with the graves of men from Yorkshire and Lancashire has no red or white roses – reflecting the  symbolism of these flowers in the fighting between the two counties in the Wars of the Roses in the 15th Century. 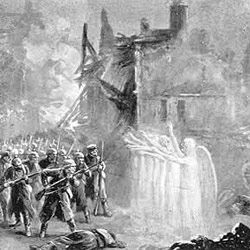 A world in which people are faced with taking life or the risk of a violent and premature death is a fruitful ground for legends and traditions.

Some like the Angel of Mons a spiritual inspiration that appeared to men of the British Expeditionary Force in Belgium in 1914 was a brilliant piece of British propaganda that convinced what was still a deeply religious nation that God was on the side of the Allies.  In both World Wars men and women had lucky mascots or routines that they felt sure guaranteed that they would survive a bombing mission or come through a campaign intact.

Tradition and with it history has been the foundation for the strength and courage shown by young men and women who have found themselves challenged in ways that are almost unimaginable to civilians.  These men and women dig deep into reserves of courage that they never believed they had and traditions of which they are passionately proud and  in so doing build new traditions for future generations.

Newspaper article of the day 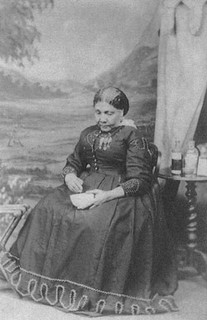 Women have gone to war alongside men in war since the beginning of organised fighting.   Historically this was as cooks, and medical staff however increasingly over the centuries they have taken on roles that have moved them into the front line. It was reported that after the Battle of Waterloo the body of a beautiful woman dressed as a French cavalry officer was found in front of one of the British infantry squares – was she the lover of one of Napoleon's soldiers who had followed him to war ?

In the Crimean War the medical work by Florence Nightingale was celebrated by Victorian society – a less well known heroine was Mary Seacole a volunteer nurse from Jamaica whose knowledge of tropical medicine saved the lives of many soldiers.

The vital work of women in the First World War was a contributory factor to some of them gaining the vote in 1918.  In the Second World War women in the UK crewed anti-aircraft guns during the Blitz and the coastal batteries that covered the English Channel.  In covert operations for the SOE in Europe women faced exactly the same risks as their male counter-parts in Nazi Occupied Europe.  In the Soviet  Union women crewed tanks, flew fighter and bomber aircraft and fought in the front line as snipers – as well as performing the duties of radio operators, cooks and nurses.