In the footsteps of The Mayflower aboard QM2

Journey of Genealogy, in association with Ancestry: Spirit of Mayflower 400 Queen Mary 2’s Journey of Genealogy returns in 2020, and this special crossing will mark the 400th anniversary of the Mayflower voyage - one of the most influential journeys in global history and a defining moment in the shared history of Britain, the US and the Netherlands. In 1620, the first English Puritans, known today as the Pilgrims, set sail from England to the New World. Prior to leaving the ship they signed the Mayflower Compact, a document which established a rudimentary form of democracy and legal order.

Events on board will commemorate the significance of this iconic journey and we will welcome back Ancestry for their second crossing.

Ancestry experts will host talks themed around the historic Mayflower voyage and the stories of the passengers on board, take a look back at the descendants of our founder Sir Samuel Cunard, and offer the opportunity to trace your family tree through the centuries and find out how your DNA connects you to the world. 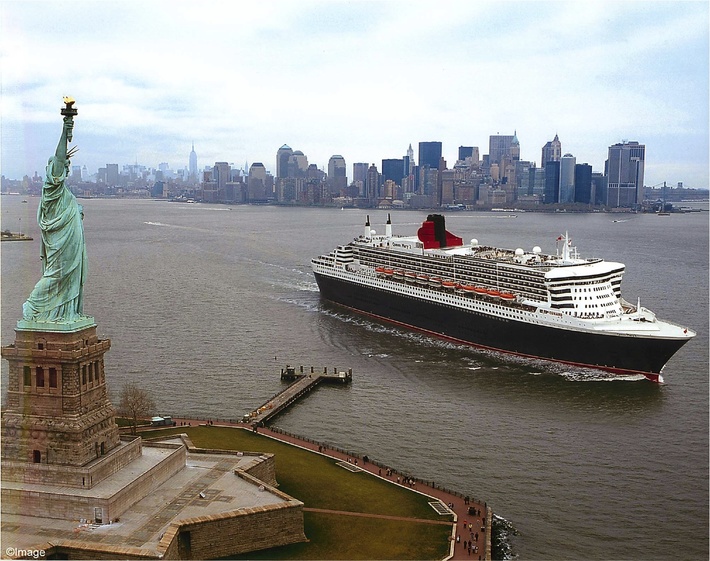 The Queen Mary 2 is usually due to sail from Southampton at 17:00.  This is the most usual time, but please check for your sailing date.  Once on board and settled into your stateroom, listen for announcements about emergency drill.  This is held at 16:00 and takes about 20 minutes.  You listen for the alarm bells, fetch your lifejackets from your stateroom and go to your allocated muster station where staff will brief you on emergency procedures and you'll listen to an announcement by the captain.  When it's over, return your lifejackets to your stateroom and head up on deck for departure.

Soon after 17:00 the QM2 sails, with a band playing on her aft decks and glasses of champagne available (around $17).  She is sometimes moored facing upstream, sometimes downstream, and if she's moored facing upstream at the City or Mayflower terminals, she'll first head further upstream before turning around, somehow managing to turn her 1,130 foot length without hitting the far bank of the river or the small boats moored there.

The Queen Mary 2 heads downstream into the Solent, heading directly towards Cowes on the Isle of Wight before making a tight turn to port (left) in the deep water channel, passing Ryde to starboard (right) and Portsmouth to port.  The QM2 rounds the Isle of Wight using the deep water route to the east (although this looks like the long way round on a map) and heads out into the English Channel.  By breakfast next morning, you're well past Bishop Rock lighthouse and out in the Atlantic.

Seven nights at sea on the Atlantic.  Cunard slowed down their crossings from 6 nights to 7 nights from 2011 onwards, although an occasional crossing may take 6 or 8 nights.  This is two days slower than it used to be, as the weekly service operated from 1946 to 1967 by the original Queen Mary and her consort Queen Elizabeth took just 5 nights for the 3,150 nautical miles (3,625 miles).

There may be no coastline or islands to see in mid-Atlantic (or even other ships, usually), but I never tire of gazing at the brooding waters of the North Atlantic.  It changes from day to day, sometimes smooth and glassy, sometimes choppy and sombre, sometimes sunny, sometimes foggy with the Queen Mary 2's fog horn blaring at regular intervals.

The QM2's clocks are put back an hour at 2am on 5 of the 7 nights because of the time difference, giving you a welcome extra hour's sleep in this direction.  You will pass within a few miles of the resting place of the Titanic (within 38 nautical miles on one of my westbound crossings) and an announcement may well be made on board.  Naturally, you'll find a whole programme of entertainment & activities on board every day, and if you really want to be bored you'll have to work hard at it.

The QM2 arrives in New York at the Brooklyn Cruise Terminal at 06:30.  This is the highlight!  Whether you're a natural early riser or not, make sure you're up and on deck by 04:45 on the morning of arrival in New York, as the arrival into New York by ocean liner is something you will remember all you life.  There's a forward-facing observation deck on deck 11,  immediately below the bridge, accessed from 'A' stairway.  You'll see the lights of Long Island to starboard (the right-hand side), Staten Island to port, and the Verrazano suspension bridge dead ahead at the entrance to New York harbour.  The Queen Mary 2 passes under the bridge with just a few precious feet of clearance above her funnel, and as she does so the fabulous Manhattan skyline comes into view.  The QM2 no longer uses Cunard's traditional terminal at Pier 90 on Manhattan itself, so she no longer steams right past the Statue of Liberty, but instead she turns to starboard (to the right) opposite the statue and heads into the Brooklyn Cruise Terminal, berthing within sight of the famous Statue and Manhattan skyline.