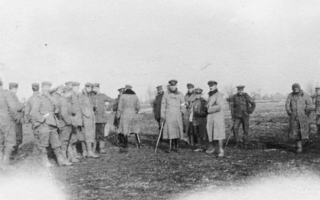 For more information and costs please send us an email at operations@spiritofremembrance.com or complete our enquiry form

Read about the search for families of those who were involved

Though there was no official truce, about 100,000 British and German troops were involved in unofficial cessations of fighting along the length of the Western Front

The first indicators that the front line soldiers wished to respect Christmas Day were when the Germans began by placing candles on the parapets of their trenches and Christmas trees and singing Christmas carols. Since some carols like “Silent Night Holy Night” have been translated from the German the British picked up the refrain began singing carols of their own. The two sides continued by shouting Christmas greetings to each other.  Hesitantly the first man climbed out of the cover of the trenches and stood unarmed on the parapet of his trench.  The numbers swelled there were excursions across No Man's Land, and  small gifts were exchanged, such as food, tobacco and alcohol, and souvenirs such as buttons and hats. 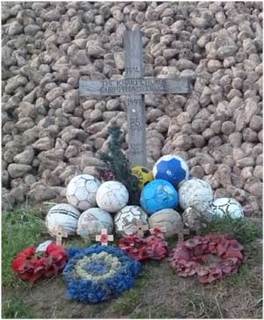 Bruce Bairnsfather the creator of the iconic British cartoon soldier “Old Bill” served near Ypres and recalled the spontaneous Christmas truce that happened in that area on the first Christmas of World War I.

"I wouldn't have missed that unique and weird Christmas Day for anything. ... I spotted a German officer, some sort of lieutenant I should think, and being a bit of a collector, I intimated to him that I had taken a fancy to some of his buttons. ... I brought out my wire clippers and, with a few deft snips, removed a couple of his buttons and put them in my pocket. I then gave him two of mine in exchange. ... The last I saw was one of my machine gunners, who was a bit of an amateur hairdresser in civil life, cutting the unnaturally long hair of a docile Boche, who was patiently kneeling on the ground whilst the automatic clippers crept up the back of his neck”

The fraternisation allowed both sides to recover their dead in No Man's Land and at places there were informal football games. Though British soldiers spoke no German a number of the German soldiers had worked in Britain before the war and therefore communication was possible.

BBC "Great War Interviews" Never seen before - video interviews with WW1 veterans from the 1960s... This interview is from Henry Williamson, a Private with the London Rifles and later a Junior Officer with the Bedfordshire Regiment, recalling life and death on the Western Front and the Christmas Truce of 1914

Here is a film about this special day: The Christmas Truce 1914 by Marcus Poulin

Interesting reading about Plugstreet (Ploegsteert) (click on image below to expand)