In the bleak winter morning of December16,  1944  in the wooded hills of the Belgian Ardennes morale was high as 1,000 German tanks and assault guns and 250,000 troops of Army Group “B” crashed through an 85 mile wide front into the the US 1st Army.

At the beginning it looked as if the young paratrooper was almost right when he joked that this offensive was going to take them all the way to America.  Nearly 9,000 US soldiers facing annihilation on the Schnee Eifel were forced to surrender and vehicles, weapons and equipment were abandoned.  But the Americans – sometimes isolated and surrounded showed extraordinary courage and endurance and the assault was slowed and finally halted. By Boxing Day the fighting was static and British troops had joined the fight on December 19 to support their American allies.

The Ardennes that initially appeared to have the makings of  a German victory became a costly defeat and by the close of the fighting the Germans had lost about 100,000 men – the Americans 19,000 killed and 47,000 wounded and the British 10,000.

As a battleground it is spectacular with wooded mountains and ancient buildings.  As a battle it has both human and historical interest – it was the greatest pitched battle ever fought by the Americans.

In addition to visiting the scenes of the action in the Battle of the Bulge, we commemorate the liberation of Ypres and Brussels in September 1944 and visit both cities, including the Royal Army Museum in Brussels.

Should you have difficulty in viewing the itinerary below or wish to have a larger font please click here or click on itinerary below.  See button at bottom of page to PRINT, EMAIL or SAVE 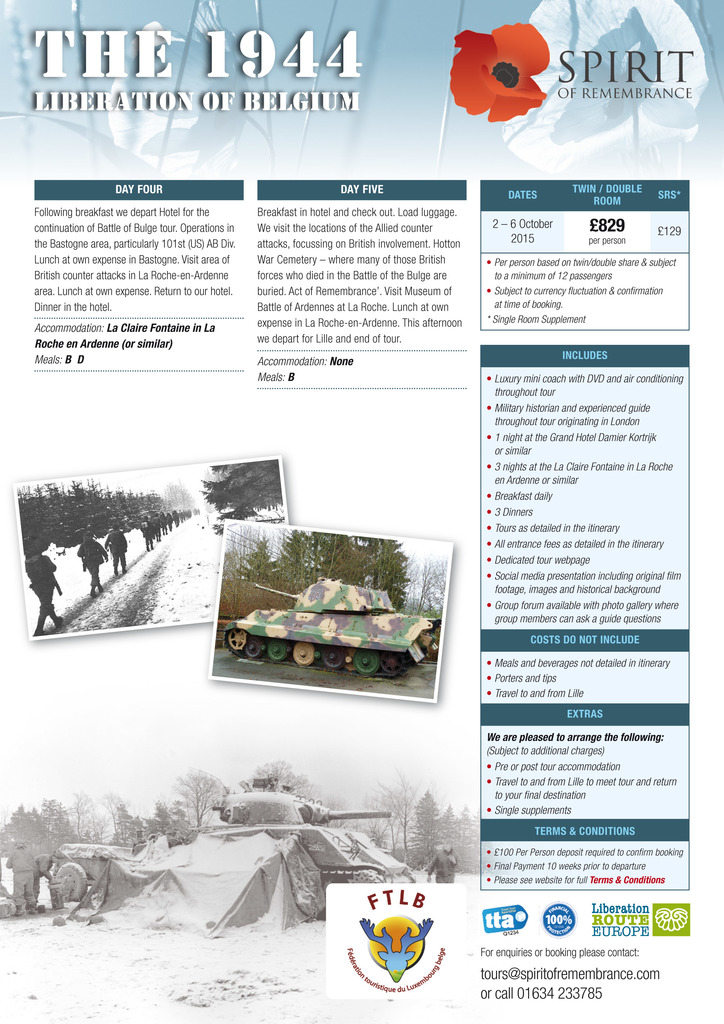